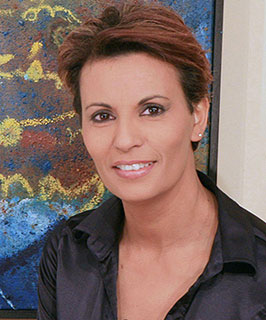 Cherny was born in North Africa. She later moved to France and then to Mexico where she continued her study of art.

Cherny's body of work is a manifestation of a variety of cultural influences, as evidenced by the number of languages utilized in the titles of her work. Whether in French, English or Spanish, her titles are as expressive as her brushstrokes. Initially not knowing the title of some of Cherny's paintings may make interpreting her abstract images even more a challenge. But the language of art proves universal, and the challenge is well worth the effort.

Although born in Africa, Cherny has traveled the world, immersing herself in several distinctly different cultures. Her African heritage, French education and exposure to Mexican culture have all merged as powerful influences in her remarkable collection of paintings. Characterized as organic and rich, the elements collide in Cherny's work in a culmination of fiery, vibrant hues, cool tones and bold, sweeping strokes.

Cherny wants viewers of her work to see what is "inside of her". And that is a passion for life clearly expressed through abstract paintings. In her work, light and color seemingly dance across the canvas in glowing lines of diffusing color, giving an effect not unlike that of the Aurora Borealis moving across the northern sky. Cherny's mastery of complexly toned color, borne out of her love for Impressionist painters such as Cézanne and Van Gogh, underscores her work, giving them a unique depth.

Cherny's collection is comprised of oil on canvas; her work inspires a range of reactions and emotions. She uses both her hands and her feet to transmit her emotions into her artwork.

Cherny has exhibited her work in Mexico, in New York and throughout Europe and now currently resides in Belgium where she continues to develop her painting technique.