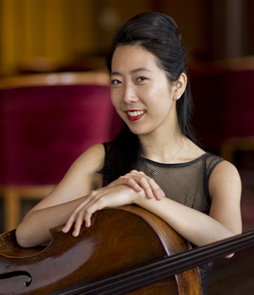 Korean cellist Christine J. Lee, laureate of the first Queen Elisabeth International Cello Competition, began playing the cello at the age of seven and made her debut with the Seoul Philharmonic when she was nine.  She was accepted to The Curtis Institute of Music at the age of ten and later studied with Orlando Cole, Peter Wiley, Carter Brey and Joel Krosnick.  Since then, she has performed around the globe as a soloist and as a chamber musician, and has won many awards.

Christine performed as a soloist with the Philadelphia Orchestra, Monterey Symphony, Bergen Philharmonic Orchestra Symphony, Houston Symphony, Young Belgian Strings, Orchestra of Mons, and the National Orchestra of Belgium, and worked with contemporary music ensembles like eighth blackbird and Juilliard AXIOM.  Christine also worked with Anner Bylsma and Roel Dieltiens and is one of the original members of "CelloPointe".