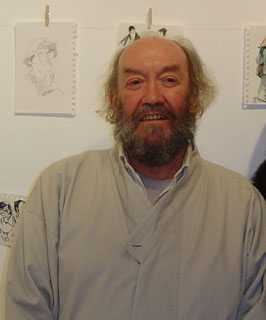 Claude Rahir was born in Verviers, Belgium, on December 17, 1937, and died in Nodebais, Belgium, on February 14, 2007.  Being a painter, sculptor, mosaic artist, aquarellist, calligrapher and poet, he created huge, monumental works, most of which are spanning several hundred square meters, which are to be found all over the world.

Having experienced the war as a child, Claude Rahir's dream has always been to create, through his art, some kind of "pointillé d'amour" and solidarity uniting people.  In this vein, he has painted, for example, in a small village in the Andes at an altitude of 4,000 meters, and in a leper asylum and a maternity clinic in Egypt.

He also realized the "Parco della Pace" in Ravenna, Italy, which he suggested to the AIMC ("Associazione Internazionale Mosaicisti Comtemporanei" or "International association of contemporary mosaic artists") and the Unesco with support from Italy, Belgium and Jamaica.  This led to the birth of "Mosaico d'amicizia fra i popoli" in 1984, with artists coming from Australia, Belgium, France, Italy, New Zealand, Russia and the USA.

In 1986, he organized a congress of contemporary mosaic artists in Louvain-la-Neuve, Belgium.  It was attended by artists comprising 18 nationalities.

While he worked abroad, he first studied the language and culture of those countries and tried to unite the inhabitants in order to enrich his projects with their input.  His art was also strongly influenced by his love for the countries he visited, the luxuriance of the landscapes in Jamaica, Guyana and the Rodrigue Islands, and the colorful clothes of Bolivia, Korea and Japan.  Consequently, his oil paintings are audacious, full of colors, and vigorous.  Even his more delicate aquarelles often come close to painting in oils.

His privileged sources of inspiration are reflected in at least two ways, one commonplace and the other cosmic.  Passionate about quantum physics and astrology, he shows our world from a different, deviant viewpoint.  One can also find many casual portrets of women, families, children, lovers, exotique sceneries, or of his own country.  His monumental wall paintings, canvasses and travel sketches amount to a compilation of commonplace or odd stories, which can be interpreted in many ways.